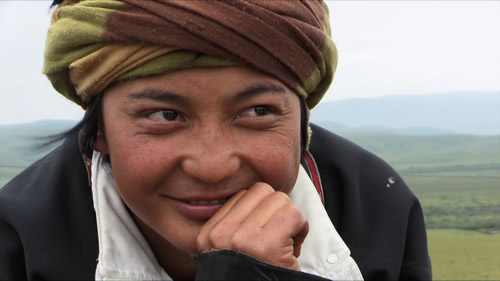 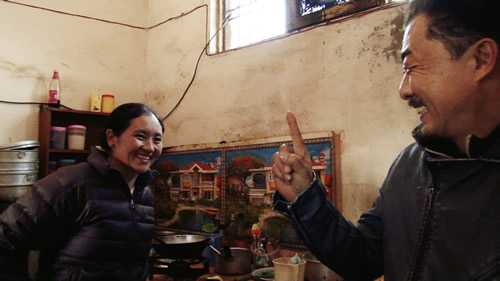 In Tibet, a protest of setting oneself on fire, known as self-immolation, against oppressive reign by the Chinese government, has been happening one after another since 2009. Up to the present (March 3rd 2015), 141 people have undergone this form of protest. Many people have, and continue to, lose their lives.

Dharamsala is a town in Northwest India where H.H. Dalai Lama the 14th and Tibetan refugees have made their temporary home since 1960. Kazuhiro Nakahara, of Japanese origin, has lived in Dharamsala for 30 years now.  Known as 'Dalai Lama's architect', he also is an active NGO representative who supports Tibetan refugees, and shares accurate and timely news of each self-immolation on his blog in Japanese. Director Kaoru Ikeya first met with Nakahara in 1989, while he was filming a documentary in Dharamsala. After 25 years of contemplating the idea of making a film on Tibetan issues, Ikeya finally completed his film this year.

'Lungta', the title of this film, means 'Wind Horse' in Tibetan.  It is believed that the horse runs up into the sky to deliver people's prayers to Buddhas and Gods alike. Lungta is an important metaphor of this film. With Nakahara as a guide, the story captures journeys through deep insights to core beliefs of 'compassion' and 'altruism' among Tibetans: a young monk who spoke the truth of Chinese oppression in front of foreign media risking his well-being; an elder who served many long years in prison yet continued holding the principle teaching of Buddha; and an ex-nun who experienced painful torture. The film illustrates these people’s undaunted beliefs.

In the contemporary world where we are swept by countless acts of violence, wars, and terrorism, their voices of non-violence are invaluable.  Please take the time to listen to them. 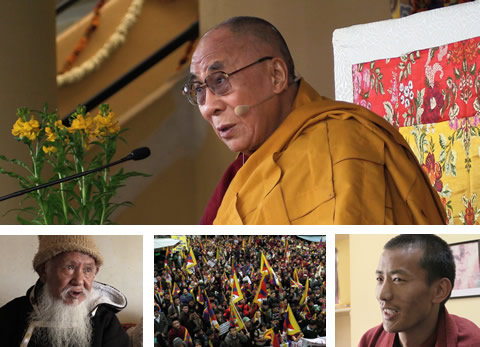 Soon after Mao Zedong (Tsetung) established the People's Republic of China (PRC), he sent the People's Liberation Army to invade Tibet in 1949. Within two years, Tibet was under the reign of the PRC. In 1959, Dalai Lama the 14th fled to India to take refuge, and around 100,000 Tibetan people followed him, crossing the border to India from Nepal.

In 2008, triggered by the Beijing Olympics, massive waves of peaceful protests occurred throughout Tibet. The Chinese government's security force treated the protests with violent oppressive means, which resulted in many incidents of killing and arrests. According to the exiled Tibetan Government, in Lhasa alone, more than 200 people were killed during this time. Due to this harsh oppression, Tibetans gained a strong distrust towards the Chinese authority and its rule, even more than before. This is said to be one of main causes of ongoing self immolation protests.  The aggressive policies of the Chinese government - such as the elimination of Tibetan language in the educational system, stabilization of nomad people, contamination of the natural environment by excessive mining, and the limited freedom of travelling and living in general, are considered to be triggers of  self-immolation protests. 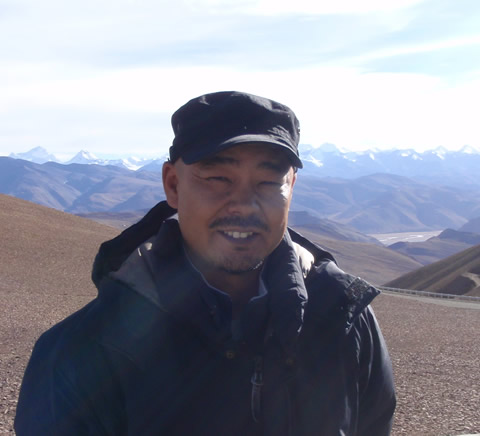 Ikeya was born in Tokyo in 1958, and graduated from Doshisha University, Kyoto in 1982. Ikeya, a notable documentary filmmaker, has also served as a visiting Professor of Body Expression and Cinematic Arts in the College of Contemporary Psychology at Rikkyo University from 2008 to 2013.

After producing a dozen TV documentaries (NHK Special), Ikeya became an independent documentary film maker in 1997.  His first theatrical feature film, Daughter from Yan'an (2002), is about a reunion between a father and his daughter whose lives were stirred up by the cultural revolution in China. This film was well-received in over 30 countries internationally, and won numerous prizes such as 'Best Documentary Award' at the Karlovy Vary International Film Festival, 'Silver Hugo' at the Chicago International Film Festival, and 'Vaclav Havel Special Award' at the One World International Human Rights Film Festival. His second film, The Ants (2006), is a tragic story of Japanese soldiers who remained in China after WWII. The Ants was a long running hit in Japanese theatres, and won a Humanitarian Award at the Hong Kong International Film Festival. Ikeya’s third film, Roots (2012), captures the life of an old man who decided to build his home from scratch after the loss of his son in the Great Eastern Japan Earthquake in 2011. This film has won the 'Ecumenical Award ' at the Berlin International Film Festival, the 'Fire Bird Award' (Grand prix) at the Hong Kong International Film Festival, the ‘Grand Prix Film Award’ from the Ministry of Cultural Affairs Japan, and a Japanese Catholic Film Award.  Chizuru, directed by Masakazu Akasaki (as his graduate thesis) and produced by Ikeya, found great success in theatres across Japan. Ikeya has also published  two books: The Ants – Truth of 2,600 Japanese Solders remained in Shanxi Province (Shincho Publisher 2007) and To Film Human – the Moment When a Documentary  film Is Made (Heibon Publisher 2011,  Japan Essayist Club Prize).

In the past, I have produced three documentary films: Daughter from Yan'an (2002), The Ants (2006), and Root (2012). Making these films, to me, has been always an act of searching to find an answer to the ultimate question: what is human dignity?  My feeling is the same for 'Lungta'. In this present world filled with violence, I hope this film can show to as many as people as possible about Tibetan people's non-violence resistance which, at its core, comes from a strong belief of compassion and altruism.

I met Tibetans for the first time when I was in Ladakh in 1984, while I was travelling in India. I suffered from high altitude sickness and they saved my life. They took care of me, a stranger from another country, like their own family.

Five years after, when H.H. Dalai Lama the 14th received the Nobel Peace Prize, I had the opportunity to make a one-hour documentary (TBS Feature Report) on the life of Tibetans exiled in India, which included an interview with H.H. Dalai Lama. My first meeting with Kazuhiro Nakahara was during my visit in Dharamsala for this work. Around that time he was an exclusive architect of the Tibetan Government in exile, and was making blue prints at the government office while studying Buddhism. 25 years later, the situation in Tibet has only worsened.  During this time I have tried to make documentary films on Tibet, but all plans have been in vain; if I make a film on Tibetan political issues, Tibetans involved with the film would be punished severely by Chinese government. At one time I considered making a fiction film, but I gave up the idea due to the difficulty in obtaining filming permissions and financial problems.

Meanwhile, self-immolation protests started occurring in Tibet, and I felt that I could not wait anymore. Moreover, the Japanese media hardly covered the news of increasing self-immolations.  During that time, I remembered Nakahara. The ex-architect of Dalai Lama has become a blogger who persistently posts news of each occurrence of self-immolation in Japanese. I imagined him in front of his computer, bearing the sadness updating yet another tragic piece of news, and I felt for him. This led me to decide to make a film with him and to travel with him in Tibet.  I am grateful from the bottom of my heart for his commitment to be an 'accomplice' throughout the completion of this film.

However, the hidden true main roles in this film are the Tibetans who have self-immolated and who continue to symbolize the principle of non-violence.  Nakahara did a wonderful job of guiding us to these people's spirit.

I would like to express my sincere and deep gratitude to the Tibetan people whom I encountered in Dharamsala, India and in Tibet, who live in Japan and helped in reading the wills left by self-immolators, and every person who has supported the creation and completion of this film. It is my hope that self-immolation stops and that true peace prevails in Tibet.